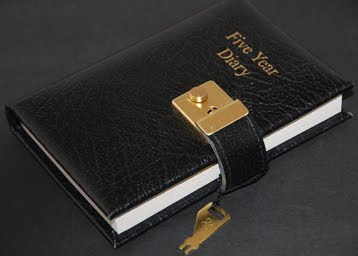 As you can probably tell from the few posts already written here, I've been thinking a lot lately about means of communication, past and present.

I grew up in a family of diary-keepers. I had diaries starting in double-digit childhood; at first, they were one-year diaries. But I quickly followed my parents' footsteps in keeping 5-year diaries.

I hate to think that I don't know whatever happened to these early diaries; they're probably still somewhere in my parents' closets, which is a rather scary concept.

2010 was the last year of my latest one, and I haven't replaced it. I stopped writing my four lines a day somewhere back over the summer, and never got back into the habit.

The principle is a fun one, though. I often noticed how similar events would happen on the same day, or how weather would repeat itself, and was interesting to be able to go back over how past years had unfolded.

This summer I tried to find a 5-year diary online for my mother, and had the darndest time. I finally ran into one, by chance, at Village Books in the Fairhaven district of Bellingham, WA, and scooped it up.

However, when looking for images for this post, I found plenty of UK sites that seem to still be selling 5-year diaries.

Email ThisBlogThis!Share to TwitterShare to FacebookShare to Pinterest
Labels: communication