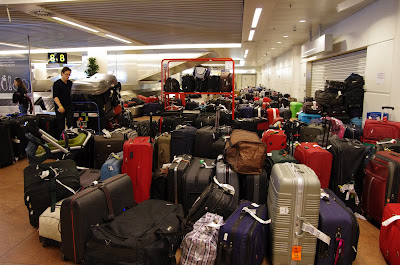 (All photos courtesy of Thierry Jouanneteau)

As some of you may know, the four of us went to Brussels for Christmas.

The departure from Aveyron was an adventure in itself; an extremely chilly surprise snowfall had hit here on Christmas Eve, making us modify our plans for getting to Toulouse's Blagnac airport.

Rather than having a cozy little Christmas celebration at home and leaving for our 6:40 am flight in the middle of what promised to be an icy night, we decided to scrap celebrations and flee to the Blagnac Ibis hotel on Christmas Eve afternoon.

All Toulouse-Brussels flights had been cancelled on the 24th, so we also left not knowing if we would be spending Christmas Day in a cosmopolitan winter wonderland, or sadly driving back to Aveyron to open our presents.

You can imagine our joy when we got to the airport and found out our flight would be taking off with little delay.

We had four suitcases, including Charlotte's -- ironically, a carry-on -- which she didn't hesitate to check in along with ours.

When we got to Brussels, we noticed some rather large groups of suitcases neatly sitting about, but we did not feel concerned by this. After all, what could go wrong on a direct 90-minute flight? 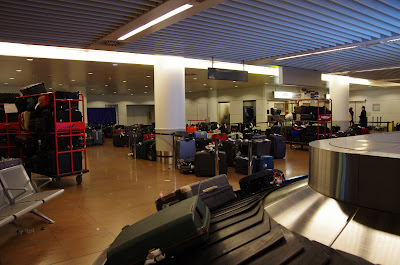 The scene was not so alarming early in the day
To make a long story short -- because this could become a very long story -- two of our suitcases came through right away.

The third popped up, bereft of all labels and ID, an hour and a half later, giving us great hope for the little carry-on that could.

Three hours after that, we gave up on finding Charlotte's suitcase in this mess: 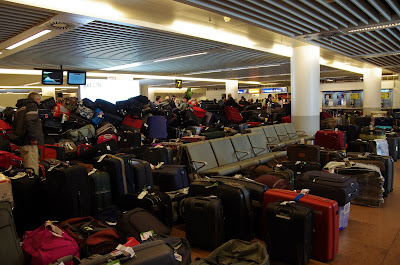 At this point, we figured it was time to move on

Fortunately, she was able to live off our clothing for our short stay.

And we kept things in perspective. During our 5 hours hanging out around the Brussels luggage carousels, we met travellers who had gone through much worse: some were spending their fourth day trying desperately to recuperate baggage in Brussels.

And for us, the good news is that her suitcase made it to Toulouse today and will be delivered to our doorstep tomorrow.

My lesson learned? If travelling in extreme winter weather, limit yourself to a carry-on -- and keep it with you at all times.
Posted by Betty Carlson at 6:43 PM